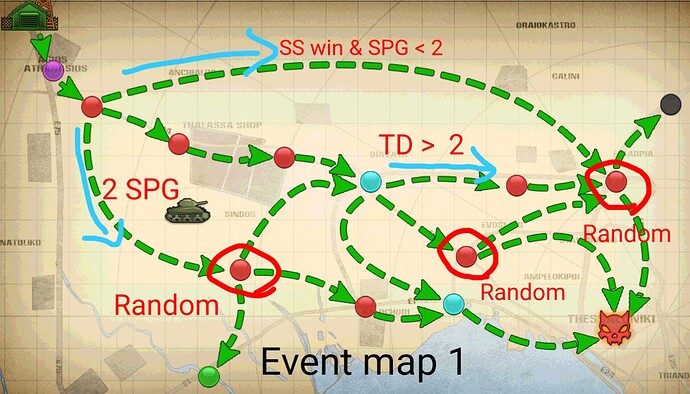 If get SS win in node 1 ,
will open new route .
and then if your square have SPG less than 2 ,
will go to quickly route . 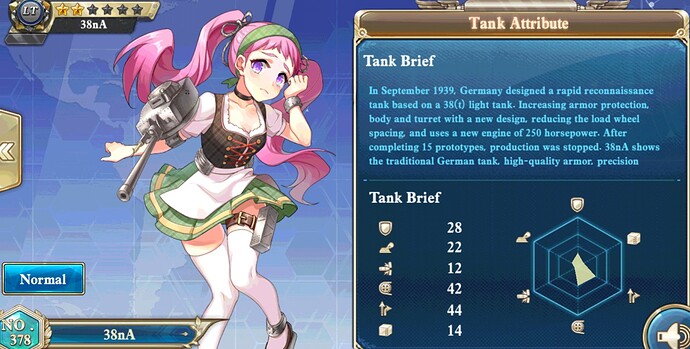 like before event ,
she will used in after map ,
so don’t forget to locked . 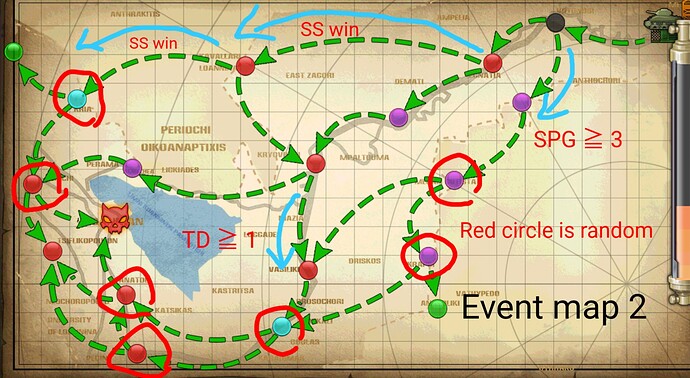 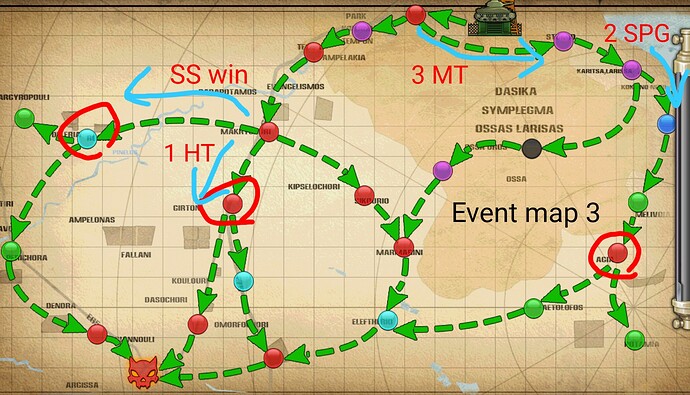 choice for your route where you can walk .
change your team members to do your best . 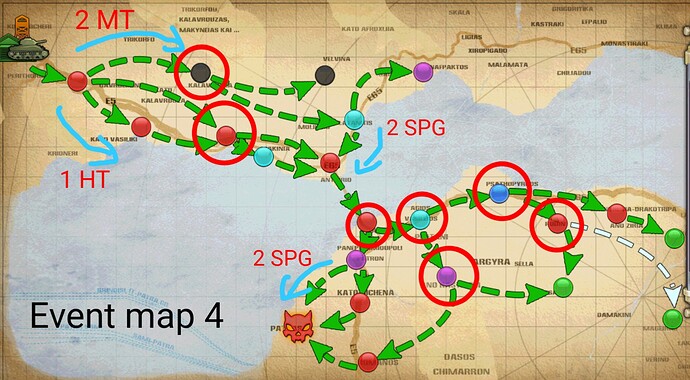 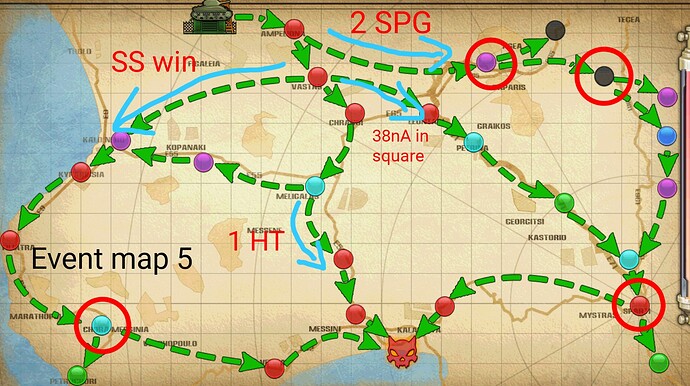 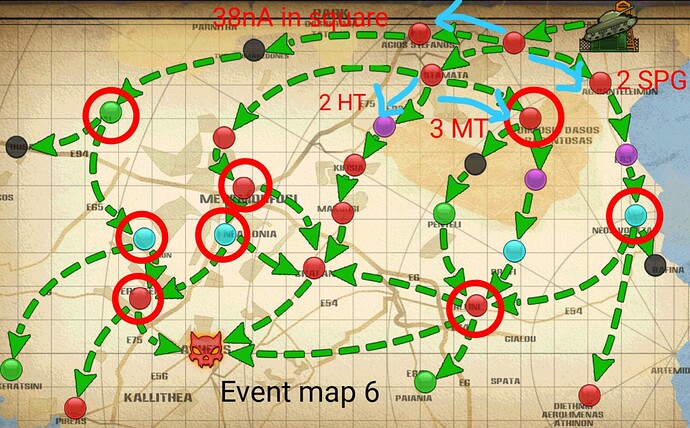 many route can walk ,
but you needs use supply car skill in Boss point .

clear this map will get prizes tank : 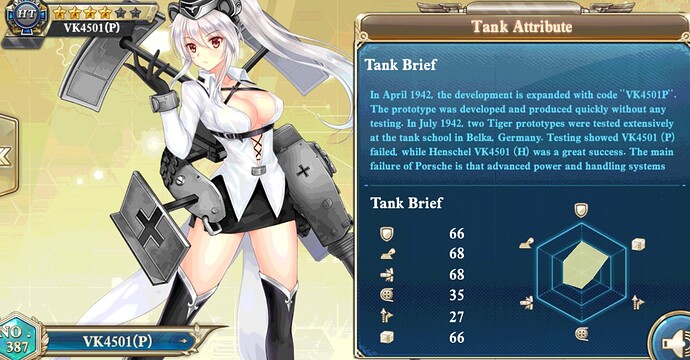 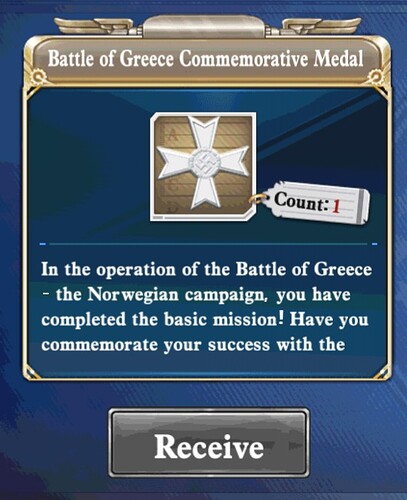 Good luck commander ,
wish you have a good day

Do you know what the boss is like? That would be great information! Thanks!

princess tank can attack all round ,
but enemy team don’t have LT or MT ,
so them can’t scout very well .

Anyone figure out how to complete Thessoloniki? Specifically the middle portion. 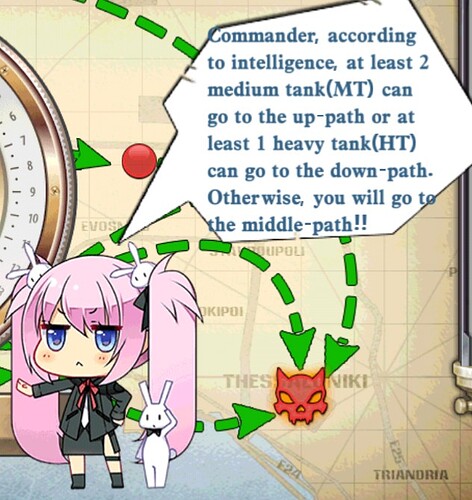 no SS win and have 2 SPG in square
will go down route .

Great guide, but in map 1 i went by the new way after getting ss with only one spg

Lol, i read It wrong. My bad then hahaha

Since this thread has good English maps already, I’ll just throw my strategies here for anyone looking to push through the event during the remainder of its time limit. They differ a little bit from those described here, but any strategy that gets you to the boss in good condition will certainly work.

E1: I used 2x SPG, 2x TD, 1x MT, and 1x LT for this one. I tried to go the SS route at first, but I would ditch a lot more often than i would go to the boss, so it ended up wasting resources with no progress whatsoever. However, by taking the lower route with two SPGs, I got to the boss much more consistently along with less risk. If you consider all the black nodes to be the same as an SSed battle, and the light blue nodes to give you one battle’s worth of resources, then the upper route and lower route generally have the same number of battles, except the lower route’s ditch will still give a small consolation prize. It didn’t take long for me to clear this one at all after I decided to just take the lower route.

E2: Same team as before. While E1’s SS route was a lot riskier for me, E2 practically forced me to get two SS ratings in a row to make any sort of progress. Since getting that is up to a lot of chance to begin with, I just let the RNG do its thing. I did eventually start using a Combat Engineer support item, which does help out a lot in getting past those two points, but takes up a slot that would otherwise help get an S clear at the boss. This map took me a long time since there was still a lot of RNG involved and I would just retreat if I didn’t get one or both SSes. I also got a lot of A ratings at the boss, but that was probably because I was on Lieutenant difficulty instead of the lower one. All things considered, the SPG route is the fastest route to take, but relies a lot more on RNG to not ditch, and if you’re low on resources, those purple nodes will drain your reserves really fast. You’re generally better off taking the SS route instead.

E3: Same team as the previous two, except I switched out my usual LT for 38nA to start leveling it up for E5 and E6. This is pretty much the same as E2 except you only need one SS instead of two, making it a lot easier. Really, it doesn’t make too much difference here since most routes get you to the boss on the fourth battle. If you try taking the SS route, though, just retreat if you don’t get the SS. You’ll end up fighting more than five battles which means lots of repairs and barely any progress anyway.

E4: Same team as the others. Taking an HT here is actually detrimental, and taking two MTs is very risky in terms of resource cost. Stick to the basics and let RNG guide you to where you need to go. It’s best if you have two SPGs so you can get to the boss in four battles or less. Very quick map, especially since there’s a lack of SPGs along the way. I very consistently got SS ratings on the non-boss nodes, making this probably the easiest map I took on.

E5: I’m currently working on this one, but I’m using the same team except for swapping out one of my SPGs for another tank. The 38nA path is fairly consistent and doesn’t pressure you to get an SS, though both routes are about the same. 38nA’s route does seem to give some resources as opposed to the SS route which takes some away, but otherwise as long as you can go down either path, progress is mostly assured. I expect this to be a relatively easy map, though it will depend on how well my substitute tank does.

E6: The route with the least amount of required battles is the 2x SPG route. That route doesn’t have as much randomness either, making it a relatively “safe” route. That said, the randomness is much more high-stakes than the 38nA route, which has slightly more randomness to it but has a little less risk (i.e. you aren’t wasting as many resources on the 38nA route, which doesn’t have purple nodes and black nodes are basically a substitute for a battle, making it much less expensive overall). I plan on sticking to the 38nA route for this one and taking my usual team with me unless, for some reason, the two SPG route takes priority over the 38nA route, in which case I’ll probably use the same team as E5. EDIT: The SPG route does take priority over the 38nA route, but the RNG is bad on this stage so it still doesn’t matter too much. Either route is fine, SPG route just takes a bit more resources in exchange for more consistency.

Hopefully this additional information will help some players push through these maps in the last month of the event. Good luck!

Major mode E6 is easier to clear it ,
but in harder mode ,
like Admiral or Marshal mode ,
SPG route and 38nA route is not safety route ,
SPG route will let you go to wrong way or let you fighting door point twice .
38nA route have a 5% chance into Boss point after door point .
so i walking middle route with 1 HT ,
it’s easier than other two ways .

i have make a video for Admiral mode E6 :

wish can help everyone